Acquiring property in the Philippines, whether it’s a completed condominium or an off-plan unit, is fairly straightforward for foreigners and expats. You just need to know the basics.

First of all, foreigners are – in principle – allowed to buy and own property in the Philippines. They simply need to meet certain conditions, just like in any other investment-friendly country in the region.

Normally, a foreigner will deal with a property developer directly if he or she wants to purchase a new or off-plan unit or, in case of the resale of an existing property, with a reputable and licensed real estate agency. Both will assist in the buying process, which includes:

Among the most sought-after new developments in Manila are currently the Novotel Suites Manila andCentury Spire, the latest luxury developments by Century Properties.

That was the straightforward part of the story. Things can get more complicated if a foreigner wants to own the land a property is built on. 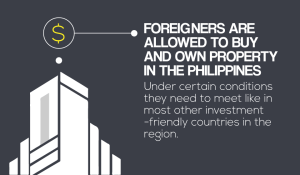 By law, foreigners don’t have the right to acquire and own land in the Philippines. This right is mostly restricted to Filipino citizens only. The only exemptions are acquisitions before the 1935 Constitution, acquisition through hereditary succession (in case the foreigner is a legal or natural heir), and buying into specially dedicated projects under a special investor visa scheme.

Foreigners who are married to a Filipino citizen can acquire land through their spouse, which is a perfectly legitimate means to acquire Philippine real estate. All paperwork will be in the spouse’s name and must be paid through his or her funds. Naturally, such an arrangement requires a solid relationship between both parties.

Another way for a foreigner to buy land is for him or her to become a shareholder in a Filipino company that buys the land. Again, Philippine law states that a minimum of five shareholders are required and the Filipino shareholders must be at least 60%. But it’s a legitimate option.

One other viable solution to land ownership for a foreigner or a foreign corporation would be a long-term lease. People and entities are currently allowed to lease Philippine land for an initial 50-year period. After that, individual foreigners can continue leasing for another 25 years while foreign-owned, Philippine-incorporated companies can continue leasing for an unlimited period of time.

So in short, a foreigner or foreign company can lease land and then legally own the house purchased or built on the rented land. Should there be any changes in the law down the line (such as the previous Philippine government having considered 100% ownership of Philippine real estate land for foreigners), then arrangements can be made to fully own the land in the future. So far, new President Rodrigo Duterte has said that he will not allow a change in the constitutional limit on individual foreign land ownership, but he has proposed to extend foreign ownership of corporations from the current 40 per cent-limit to up to 70 per cent.

What Do OFWs/Former Filipino citizens Need To Know?

Overseas Filipino Workers (OFWs) and all other Filipinos abroad, as long as they have not renounced their citizenship, have the same ownership rights as domestic Filipinos. In fact, if you’re an OFW, it’s likely that you have invested or are considering investing your hard-earned money into Philippine real estate. 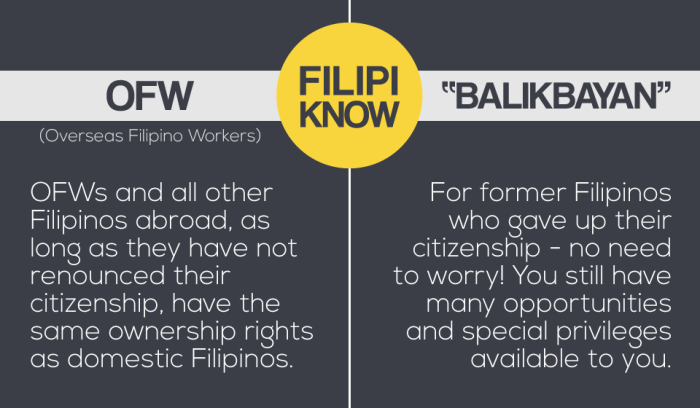 Perhaps you’ve chosen a property during a recent visit, but need someone to complete the acquisition process? A trusted property agent can do this using a special power of attorney (SPA). This involves paperwork and extra fees for arranging contracts, income proofs, power of attorney and other documents consularised and approved, but it can save you a lot of precious time and travel expenses. Once all documents are in order, the property agent can even apply for a loan in your name.

If you’re a former Filipino who has given up your Filipino citizenship (“Balikbayan”), it is a bit more complicated although you still have more options than a foreigner. Purchase of land by a former natural-born Filipino citizen is subject to limitations. For example, you can only own up to 1,000 square meters of residential land or one hectare of agricultural or farm land.

For business purposes, 5,000 square meters of urban land or three hectares of rural land are permitted.

That said, former Filipino citizens have the option of re-applying for their original citizenship to regain full rights of possession of Philippine real estate property by becoming dual citizens. This can be a longer process but is still doable.

Naturally, it’s not the boom in real estate alone that makes the Philippines a worthwhile investment destination. It’s the country’s strong macro-economic fundamentals including solid GDP growth, a stable currency and an advanced legal system, a widely English-speaking and hospitable population and, in addition, relatively low costs of living, a tropical climate and numerous options for recreational and leisure activities.

Read more on Why To Invest And Why To Live In The Philippines in our next piece of this series.